This was a 40 mile walk over 4 days along the stunning Wild Coast of South Africa's Eastern Cape Province, with which Scotland has a twinning link as well as long historical connections. The purpose was to raise badly needed funds for community projects in Eastern Cape with which ACTSA Scotland has had contact and for ACTSA's own book appeal for school libraries, as well as strengthening Scotland's links with the Province. All the projects have been visited by ACTSA members in the past and are deeply impressive. Walkers were committed to raising sponsorship by individual or collective effort, and a total of Ł7000 was raised this time by the six participants. Ł1400 has been sent to each of the projects supported, including ACTSA Scotland's eighth container of books sent off in November 2011. 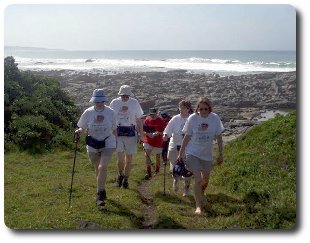 The entire visit took some two weeks, and included time in both Cape Town and Johannesburg with visits to places and people of interest, and some time in Eastern Cape after the walk to visit the projects being supported.

This was the third Wild Coast Walk to be organised by ACTSA Scotland, and participants in each of them have found the experience enormously worthwhile.

Banker's order forms are still available for anyone wishing to make contributions to the causes supported over a period.

The projects supported are:


Vukani Old Age Service Centre.
This club for elderly people opened in Zwelitsha in 1996 as "an endeavour to combat poverty, malnutrition, lousiness and loneliness among the aged".

Members are taught basic literacy, make a variety of craft goods for income generation, have access to medical help, learn First Aid and other skills, are fed on the premises and take meals to bed-ridden neighbours, discuss social and other problems and their new democratic rights, and take part in excursions to "taste the fruit of obtained freedom e.g. to walk and sit where in the past they never dared". The overall intention is to give members "something to live for instead of wishing to disappear because of financial problems and neglect".

The Centre was visited in 2002 by an ACTSA/STUC women's delegation, which was impressed by the enthusiasm and commitment of members and leaders, and again by ACTSA members in 2004, 2006 and 2008 as well as this time in 2011. It runs on a shoestring, and received some welcome help from a small U.K. trust as a result of the initial contact from Scotland. Even the modest amount  raised by the Walk will help substantially.

Bethany Place of Safety.
This children's home near Mthatha (formerly Umtata) looks after 60 or 70 children aged 0 - 6, who have been orphaned, abandoned or abused. The objective is to have all children fostered or adopted by the time they reach school age, though as about half are HIV+ when they arrive many do not survive that long.

Local community groups and businesses assist with funding, and some support also comes from the U.K. through the efforts of returning volunteers who have worked at Bethany through Project Trust (a gap-year organisation based in Coll) and speak warmly of the atmosphere of love and care that pervades the place.  Bethany's website at  bethanyhome.org.za  has more information.  ACTSA members visited previously  in 2004 and 2008.

Blythswood Institution.
This secondary school in Ngqamakhwe near Butterworth was founded as a Scottish mission school in 1877 as a daughter of Lovedale Institution, at the insistent request of the local people. Funding was raised by a public collection day in the area, then matched by funds gathered in Scotland.

It became a very substantial establishment, but suffered badly when compulsorily absorbed into apartheid's system of "Bantu Education" in 1954. An ACTSA delegation in 1998 found it in a very bad physical state (though in good heart), but when a second delegation visited in 2004 contractors were just beginning a major physical upgrade on behalf of the Provincial Government and by the time of later visits the buildings had been transformed. More importantly, it is clearly a very happy school which can only be good for the progress of its learners. On all these occasions the staff and students put on a fantastic welcome and were very pleased to renew the Scottish connection.

Following the 2004 Walk several Glasgow schools took an active interest in Blythswood, and the city's Education Department assisted in producing and distributing information about the school.

Masimanyane Women's Support Centre.
This was established in January, 1996 in East London to offer counselling and support to women who are victims of rape and domestic violence. It still has advice clinics at East London and Mdantsane magistrates courts, helping and supporting thousands of women victims through the legal maze, but it has also developed into a much wider project with an outreach and support programme that covers a large part of the Eastern Cape as well as an international reputation for innovation, research, public information and advocacy.

It has a pioneering programme with men who oppose violence, uses regular radio talk-shows and phone-ins to reach a mass audience, works in schools on HIV/AIDS prevention as well as on social stereotyping and on attitudes to violence against women, puts thought-out policy proposals to Government and to international fora, and works tirelessly to "instil the values necessary to build and sustain a human rights culture and democracy", since "Social justice and social change require more than laws and policies". The daily reality of helping individual traumatised victims ensures that these wider social objectives remain solidly grounded in real life. See: www.masimanyane.org.za

Following ACTSA's visits since 2002 links have been established with sister organisations in Scotland, with regular exchanges of information and ideas.